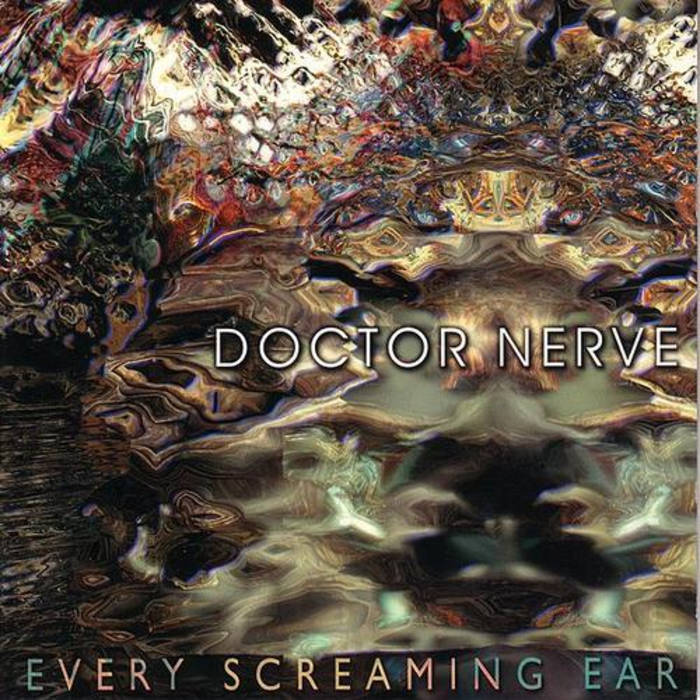 Scorching live Doctor Nerve performances recorded while the band was on tour in Europe, and utterly insane collaborations makes this record a raging treat for your screaming ears. Bunch of raw live Nerve performances, plus Nick performing a couple of Nerve tunes with Isso Yukihiro Group during his Japan solo tour, plus a Beefheart cover with Nerve and Meridian Arts Ensemble, plus an arrangement of a Nerve tune performed by the chamber ensemble NewEar... c'mon this is nuts. Just get it.

"Nerveware No 8" was recorded on May 15,1996 by NewEar in White Recital Hall at the Performing Arts Center at UMKC, and engineered by Scott Gregory.

P. Alonzo Conway arranged this piece for NewEar, cleverly omitting the guitar part, which was later added by Didkovsky at Harvestworks.

"When it Blows Its Stacks" was recorded by Doctor Nerve and Meridian Arts Ensemble. Recorded and mixed at World Studios right around June 1996. Basic tracks engineered by Greg Anderson, Paul Warren Jacobs, and Mark Dann (but mostly by Greg). Mixed by Greg Anderson and Nick Didkovsky. Post production at Harvestworks by Paul Geluso and Didkovsky. Belted out by Rob Gut Bustin' Henke

"Beta 14 ok" and "Preaching to the Converted" were performed at MANDA-LA 2 in Tokyo by Isso Yukihiro Group and Nick Didkovsky on Aug 4, 1996.
First guitar solo in Preaching by Natsuki Kido, second by Didkovsky.
Recorded to ADAT by Kouhei Amano
Mixed by Didkovsky and Paul Geluso at Harvestworks.

Splinter, Nerveware No. 3, Dumb Deconstruction, Verily Steaming Aria, and Nerveware No. 1 performed by Doctor Nerve at The Knitting Factory, NYC on May 29, 1992, and recorded direct to DAT by Jon Rosenberg.

"Out to Bomb Fresh Kings" performed by Doctor Nerve on January 20, 1992 at The Paradox, Tilburg, The Netherlands. Engineered by nobody we know and dug up on a cassette that Greg had kicking around.

All the other Nerve tunes recorded at Studenten Haus in Mainz, Germany, on October 18, 1992. Recording engineer: Volker Brzezinski

"They Were As If They Also Which Pierced Him" is a trio which lurked in our set lists for a while but was never intended for release.

"Dumb Deconstruction" is a spontaneous deterioration of the composition "I Am Not Dumb Now". It is a conducted improvisation which spindles and mutilates the piece into a semi recognizable form, a technique that was sort of inspired by Nick's participation in Zorn's Cobra.

Nerveware No 1, 3, and 8 were composed all or in part by DrNerve.hmsl, an automatic composition program written by Didkovsky in Hierarchical Music Specification Language.

"Nothing You Can Do Phone Me" was perpetrated by Henke on ND's answering machine.

Thanks to Hirotsugu Watanabe, Naotsugo Ito, and everyone at Locus Solus for the Japan Crush; Volker Brzezinski and Uli Armstruster for the Mainz Debauch; Willen Kniknie and Natasha for the Tilburg Bacchanal; Phil Burk, Larry Polansky, and David Rosenboom for Hierarchical Music Specification Language; Yves for the acoustic scooter guitar; P. Alonzo Conway and NewEar for breaking new ground; Jonas Jenkins for his enlightened proselytizing; Jon Nelson and MAE for their spirit, vigor, and rigor; my iguana brothers Isso Yukihiro Group for their disquieting virtuosity; Tech 21 for the cunningly malevolent PSA-1; Promark for the white oak; Bill Ellsworth for the shrewd use of his secret website during the development phase of the artwork; everyone on Nerve for 13+ years of beautiful sweat; and lastly to Don Van Vliet for a lifetime of inspiration.
Scream on
Nick Didkovsky
Sept 4, 1996, New York City

Special thanks to Charly Heidenreich for getting us booked for the ZAPPANALE MUSIC & MORE Festival in Bad Doberan, Germany, in August 2011 which led to renewed interest and the physical re-pressing of both Every Screaming Ear and SKIN on CD on Charly's FREAKSHOW RECORDS label.

Extra special thanks to our biggest fan Daggie Schindler who came up with the idea of a tour and supported it with massive effort to make it come true, supported by a bunch of lunatics addicted to Nerve's music.